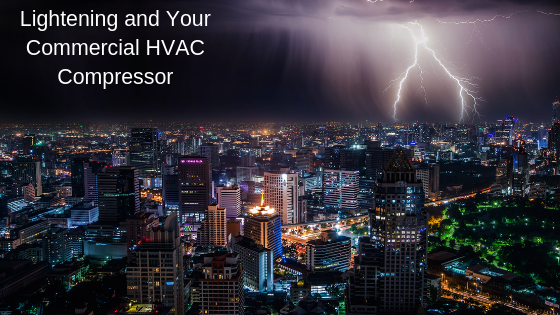 If you live in a place known for dramatic thunderstorms, you have good reason to be worried about a lightning strike. Lightning can cause serious damage to your commercial HVAC compressor and your entire building. Here's what you really need to know about lightning and how it can affect your HVAC compressor.

Can Lightning Strike Your HVAC Compressor?

Simply put, yes. Your HVAC compressor uses a variety of electronic components as well as wire coils to create power. All of these components are an easy target for a lightning strike during a storm, especially if they are in use. This is why we recommend that businesses use their thermostats to shut down HVAC systems in the event of a major storm passing nearby. Remember, if the lightning is close enough to hear and see, it is close enough to strike.

What Happens When Lightning Strikes Your Compressor?

There are some telltale signs that you should be watching for if you believe a lightning strike has occurred. Lightning strikes produce unimaginable power, and they almost always leave behind signs of charring or burning. It is highly unlikely that a lightning strike would kill your compressor but leave the rest of your HVAC unit or building untouched. Instead, you can count on having melted wires, a damaged compressor, blown capacitors and more. If your HVAC unit was installed using high-quality surge protection methods, the rest of your building may not be affected, but there is no guarantee.

Can You Protect Your HVAC System from Lightning?

As mentioned above, the best way to protect your commercial HVAC compressor from lightning is to shut it down when storms are nearby. While this may cause temporary discomfort, it can save you thousands of dollars in repairs. When the HVAC system is not in use, it will not produce the electrical forces that so often attract lightning in the first place. This is important especially if your commercial HVAC system is installed atop a tall building where it is already at a heightened risk.

Buying a Replacement Compressor After a Strike

If there's one thing we do know, it's that your compressor is rarely ever spared in the event of a lightning strike. In some instances, the compressor will continue to function for a period of time after the strike, but you will find that it is less efficient. Usually, this happens when the coils inside the compressor have been damaged, but not completely burned out. The compressor will turn on and function, but the coils will begin to overheat until they finally burn out weeks or months later. If you have strong evidence that a lightning strike occured, it is best to get a quote for replacing your compressor unit sooner rather than later.