Frost on Your Compressor's Head - Is There a Problem? 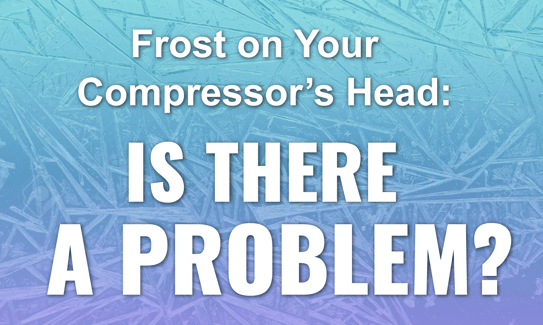 When it comes to your commercial refrigeration and HVAC equipment, you are always on the lookout for signs of a problem. After all, if the compressor fails, your whole business could be put on hold. As a result, many people become concerned when they discover frost accumulating on the outside of their compressor head and the surrounding lines. Should there be frost on the outside of the equipment, or does that mean there's a leak of some kind? That's what we're here to answer today.

How Does Frost Accumulate?

The first thing you need to know is that frost on your compressor and lines is perfectly normal. The reason that frost forms on these parts of your system is because they become very cold during normal operation. Meanwhile, the ambient air surrounding your compressor tends to be much warmer. When the warm air touches the cool side of the compressor, it begins to condense, forming tiny beads of water. In most cases, this condensation creates a thin film of moisture that you don't even notice. However, if the temperature of the condenser gets cold enough to reach the 32° F mark, that thin film of water condensation will actually freeze, creating the frost that you are seeing. Frost on the compressor is especially common in applications like commercial refrigeration where the compressor is working hard to keep the refrigerator or freezer at the proper temperature. Since the compressor is working on a nearly constant basis to maintain super low temperatures, there is plenty of time for water to condensate and freeze over, whereas residential units do not usually stay on for long enough stretches for this to occur.

Is there a leak?

If all you are seeing is a bit of frost on the outside of your compressor head, there is no reason to think you have a leak, either inside or outside of your unit. In the past, freezing buildup on the outside of the system would indicate a bad seal inside the unit that allowed liquid refrigerant to reach the compressor. Due to improvements in the design and function of compressors, and the use of superheat, these problems are far less likely to occur today.

Things to Think About

If you are still concerned about the frost buildup on your compressor, or you are starting to see serious buildups of ice on your unit, you may need to conduct a further inspection. For instance, making sure that your system has been properly serviced with clean filters and plenty of refrigerant is an important first step in determining whether or not you have a real problem on your hands. If your system is operating normally and does not appear to be kicking on and off in unusual ways, the frost is not likely to be a problem. If you do have a more serious icing problem, you will know it when the system freezes up and then stays off for an extended period of time, leading to a thaw that often causes flooding due to the amount of ice that is melting from the system. If you are doing regular maintenance on your system, you should be able to identify signs of serious icing before they become problematic.

All in all, a bit of frost on your compressor is nothing to fret over. It just means that the air around your compressor is warm and that your compressor is working hard to keep things cool inside your system. The frost is not a sign of a leak, and won't cause any damage to the unit by itself. As long as your regular maintenance is done, you should be in the clear. If you are looking for a suggested compressor for your commercial refrigeration system, we would recommend our Copeland 3DS series.