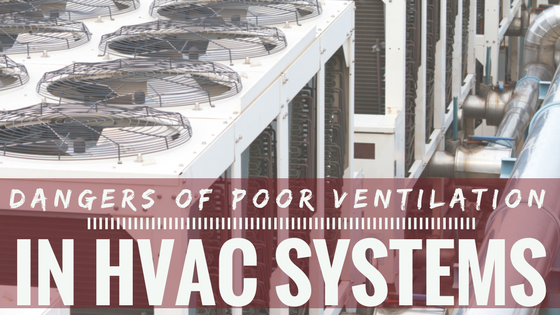 Before we go into more detail, let’s take a look at the major causes of insufficient airflow in HVAC systems.

In a HVAC unit, the filter keeps dust and debris out of the system and ductwork. As the filter gets dirty, it will gradually restrict the airflow.

Located outside the building, the role of the condenser coil is to release heat into the atmosphere, so the refrigerant can cool off. Accumulation of dirt and debris can partially block airflow and prevent the condenser coil from releasing heat efficiently.

When it comes to HVAC fans, there are two major factors that can negatively affect airflow: 1) a malfunctioning fan that is unable to properly circulate the air through the system; 2) a layer of dirt on the fan blades, which makes the fan run at a lower speed.

In air-cooled HVAC systems, the condensing units are typically located in mechanical rooms or outside. If dust and debris accumulate around the unit, the system will not have access to enough air. By restricting airflow, your condenser will have debris buildup which can cause the system to overheat.

To ensure efficient system operation and proper airflow, all vents should be completely open and unobstructed by equipment or storage items.

Cracks, gaps and/or holes in ductwork can cause air leakage, which contributes to low airflow rates. On the other hand, dirt and dust can build up inside ducts, reducing their diameter. A smaller diameter duct will not only restrict airflow for heating and air conditioning, it will have a negative impact on the system’s performance as well.

Incorrect sizing and design are two more causes of airflow problems in HVAC systems. For instance, a HVAC unit that is too small for a building will need to operate for longer periods of time or to cycle on and off more frequently in order to maintain the desired temperature and humidity levels. This will increase the energy bills, while reducing the lifespan of different components, including the compressor.

Most airflow-related problems in HVAC systems are relatively easy and inexpensive to fix. Conversely, ignoring them could lead to reduced system efficiency, which manifests itself as:

A malfunctioning part that impedes airflow to the evaporator can cause the temperature around the coil to fall below the freezing point. Once ice begins to form along the coil, it blocks the heat transfer between the air and refrigerant. As a result, the system must work harder and longer in order to cool the building properly.

Reduced airflow through the central heating system can cause the heat exchanger to reach the pre-set limit too quickly. As a safety measure, the high-limit control switch will shut off the burner, so the heat exchanger can cool down. If that happens too often, the HVAC unit will not be able to provide the amount of heat required to maintain the desired temperature throughout the building. An inefficient HVAC unit will inevitably lead to higher operating and repair costs.

The most reliable way to prevent all these problems is to regularly maintain your HVAC system. By implementing a preventive HVAC maintenance plan tailored to fit your needs, you can rest assured knowing that you will provide a comfortable environment for your customers and employees, without incurring additional costs.