Your Commercial A/C Over 50 Years: What Has Changed 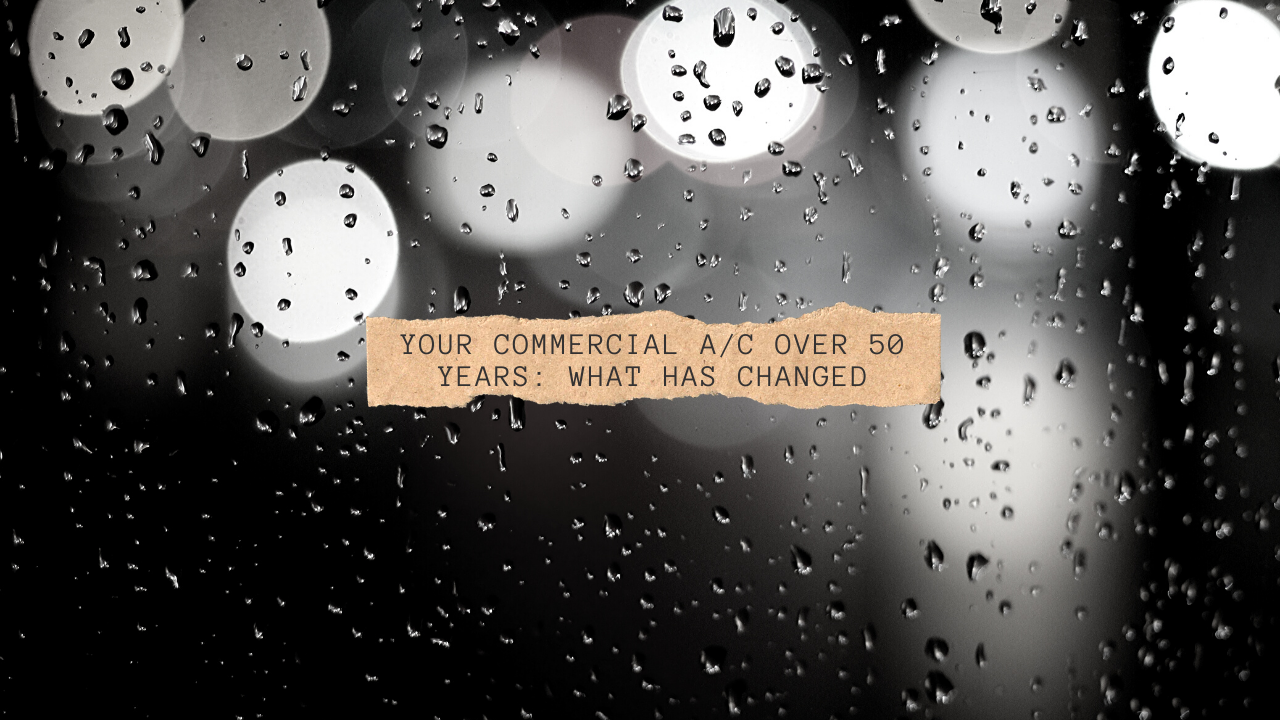 Five decades is a long time in technology circles. Talking about air conditioning technology, the A/C industry has gone from the basic ventilation and cooling systems used in mines to Willis Carrier’s implementation of a commercial air conditioning system over a century ago.

Today’s commercial A/C systems are complex, ubiquitous and energy-efficient. They also autonomously operate behind the scenes to cool both large and small commercial establishments for extended periods of time.

What has changed in the commercial A/C space over the years, and how is commercial air conditioning done today? Let’s take a look at the evolution of commercial A/C from a manufacturing and end-user perspective.

Early air conditioning systems were quite basic in design and operation. Often used in commercial setups, the A/C systems used a series of ducts filled with hot water and later cold water after Willis Carrier’s invention. These first systems were large in size, consumed a lot of energy, and quite expensive to acquire and operate.

In fact, it wasn’t until the 1930s that smaller A/C systems that could fit in typical residential spaces were designed. Even then, most people could not afford the simple device, unless they were wealthy or operated a business that relied on a cooling system. Though basic, the early forays into commercial cooling paved the way for research that led to what came in the 70s up to today.

Willis Haviland Carrier, the inventor of the electrical A/C systems, went on to found Carrier Corporations with seven other shareholders. The company exists to this day as a brand of the multi-billion dollar manufacturer based in Florida known as United Technologies (UTC).

From 1970 to 1980, there was the widespread adoption of commercial and residential A/C systems not just in the United States but across the world. For instance, the development of units that could be placed elsewhere other than on windows led to the adoption of A/C systems in Asia. This because of the dense population in some of these regions.

It was also during the 70s that refrigerants replaced water in commercial A/C units. Moreover, the use of solar energy as a clean power source became popular. In the mid-70s, the energy crisis prompted the US government to take an active role in the research and development of more efficient HVAC systems. This led to the implementation of new standards and regulations in the sector.

The 70s also saw the invention of newer A/C technologies, such as the heat pump model. One could argue that it was during the 70s that commercial HVAC systems became popular.

In the 80s, the commercial HVAC system came under much scrutiny from various bodies, including the UN, and other governments for their role in the depletion of the ozone layer. As a result, many of the changes in the next years centered around efficiency and clean energy.

For instance, chlorofluorocarbons (CFCs), which are known to deplete the ozone layer, were banned by most governments. This forced manufacturers to research and introduce cleaner refrigerants for the A/C systems. Notable developments were carried out during the period, including the adoption of new refrigerants, such as R134A and others, along the way.

The development of scroll compressors led to even better efficiency and adoption across all industries where cooling is required. Some of the established manufacturers making scroll compressors are Danfoss, Carrier, and Copeland.

The State of the Commercial A/C Industry

Today’s A/C systems are smart, efficient and more connected than ever. The Internet of Things (IoT), has seen commercial A/C systems becoming part of larger networks of things in commercial spaces working together for a common purpose.

Environmental sensors are being used to determine the cooling needs in large buildings and adjust HVAC systems accordingly. The use of AI in predicting and managing energy usage in buildings also continues to influence how modern HVAC systems are manufactured and installed in commercial spaces.

While the commercial AC industry has made significant strides in the past years, it’s no secret that it is among the largest contributors to the environmental problems of today. According to the International Energy Agency, 6% of energy usage in the United States goes into AC systems.

The future of commercial A/C lies in increased efficiency and connectivity. It is, therefore, good to see manufacturers pushing the boundaries when it comes to increasing AC efficiency. For instance, Carrier has been recognized by the IEA for launching an AC with an average seasonal energy efficiency ratio of 12.3.

As the evolution of commercial A/C evolves, we continue to strive and do our part to provide quality remanufactured compressors. Our system allows companies to replace their commercial compressors at an affordable rate while reducing our carbon footprint at the same time.  To find out how we can help you with your commercial compressor needs, contact us today.