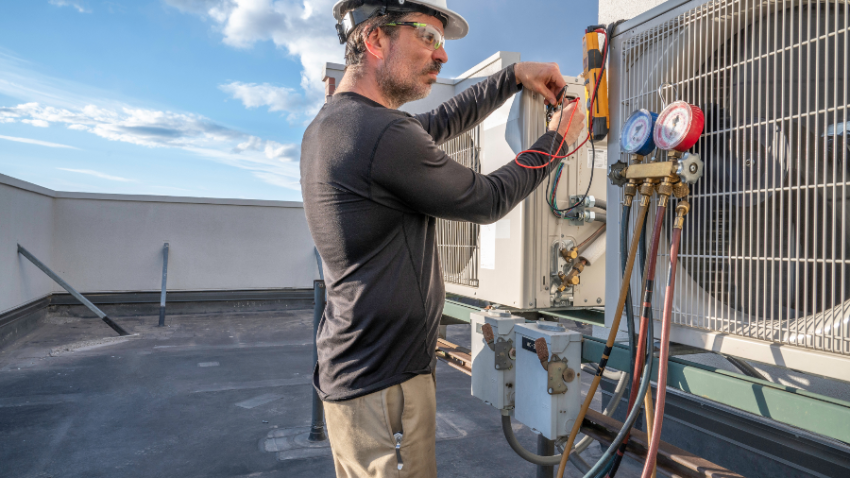 Commercial HVAC compressor failure is one of the most serious problems your HVAC system can have.

When a commercial compressor fails, it means replacing the most complex, important, and often costly part in the entire system. In contrast to many other components, which slowly reduce your total efficiency as they degrade, a failed compressor brings operations to an immediate stop.

In fact, if other parts of your HVAC system are having issues, it’s inevitably the compressor that works harder to make up the difference. This is one of many ways that the compressor earns the name “the heart of the HVAC system.” And, yes, damage elsewhere can age your HVAC compressor prematurely.

Luckily, none of the most common commercial HVAC problems can be traced back to the compressor. When the compressor is regularly maintained, it will usually run anywhere from eight to ten years without so much as a loud noise or an odd smell. Compressors very rarely fail “out of nowhere.”

Most compressors age out, with efficiency slowly declining in the second half of their service life until it is finally time to replace them. When a compressor fails suddenly, it usually points to a deeper concern within the operating environment. That could be an electrical issue, faulty safety switch elsewhere in the system, adding too much oil, chemical pollution, and more.

But, yes – compressors can behave erratically, and they may even fail unexpectedly. If you are following a careful maintenance schedule and using best practices, you could even get caught off guard when the compressor fails since so many other explanations for system problems usually turn out to be right.

Let’s take a closer look at the worst-case scenario.

How Do You Know When a Commercial HVAC Compressor Is Really Failing?

There are seven key signs of commercial compressor failure. Some are closely associated with other HVAC problems – but the more of them you notice at one time, the more likely the compressor is at fault. It may be only a matter of time before it shuts down for good.

Watch out for these commercial compressor symptoms:

Part of your regular commercial compressor maintenance should include checking the unit itself for any odd behavior on startup. A clicking noise is the most common signal of wear and tear on the compressor motor. Although it can be accessed for repair, replacement is usually best.

Warm air during the cooling cycle is one of the most common HVAC complaints. If you have ruled out low refrigerant levels and checked for a leak, the next suspect is the compressor itself. The compressor may be unable to cycle enough refrigerant to meet the needs of your square footage.

Reduced airflow is another matter where a smaller problem could camouflage a bigger one. By far and away, the most common cause of reduced airflow is a dirty air filter – one that needs to be cleaned out or replaced. But it can also indicate that the compressor is struggling.

Many commercial HVAC systems never fully power down, so you may or may not have the opportunity to see the compressor kick on very often. If at all possible, make controlled shutdown and startup part of your maintenance routine, as this can reveal HVAC woes that otherwise might be hard to spot.

Various electrical problems can effectively fry your commercial compressor. This is a more serious issue than most because of the enhanced risk of fire. Likewise, until you understand the root cause, your new commercial compressor may quickly meet the same fate your old one did.

No matter if it’s a cooling cycle or a heating cycle, long periods of operation indicate struggle is taking place somewhere. Sometimes, this can point to a thermostat in need of calibration (or cleaning when smart thermostats rely on sensors.) In other cases, it is an early “tell” from an aging compressor.

Sooner or later, your commercial HVAC compressor will fail. Are you ready?

Budgets are tight, and everyone wants to get the most money possible from a key piece of equipment like an HVAC compressor. But if you wait too long, you’ll be dealing with unwanted business impact in the form of HVAC failure. That can turn your property all but uninhabitable in hours.

When the inevitable happens, have a remanufactured commercial compressor waiting. It costs much less than an all-new unit, ships in days, and meets your performance and environmental commitments.